Here's how dozens of people came together to create a tiny house village for homeless people in Denver, Colorado, with a little help from Everence.

On the corner of 38th and Walnut in the dusty warehouse district of Denver, Colorado, sat an overgrown vacant lot.

This empty lot begged so many questions. What could be done here? Could it be used to address the everyday disaster of homelessness, the daily emergency of no roof over your head – not by choice, but by circumstance?

A village of ordinary-size houses wouldn’t be feasible, but what about tiny houses?

Ten thousand people in Denver are homeless on a typical night. In fact, a 2016 study of affordable housing in the Denver metro area found a shortage of 21,000 homes. And Denver isn’t alone. It’s like this in many large cities across the United States.

The number of homeless children has doubled in the last decade. Twenty-three percent of homeless people are veterans. Many might be interested to learn that 71 percent of the homeless have jobs, and almost 50 percent work 40 hours a week.

Not your typical disaster

This slow-motion disaster challenges Mennonite Disaster Service’s core mission of “Responding, Rebuilding, Restoring.” It’s not the typical disaster of muddy, moldy muck from a flood. It’s not splintered wood and tattered pieces of peoples’ lives scattered across fields from a tornado or hurricane.

Homelessness is a new disaster. It can be seen in the eyes of a hungry young woman enrolled in college but without enough money for rent, the labored pace of a senior citizen pushing an overflowing shopping cart, or the dirty bedroll of a 20-something who can’t get a minimum-wage job because his car broke down.

It’s a disaster that starts with good people who got so comfortable that they forgot the stream of people traveling day and night, down back alleys, looking for a place to rest.
In Denver, a small group of people began meeting a few years ago to practice the discipline of hope alongside those experiencing homelessness. Group members started building tiny homes with materials recycled and repurposed. They tried out the idea of making sustainable, small-footprint, cost-efficient homes.

Under the leadership and direction of the advocacy group, Denver Homeless Out Loud, unlikely partners like Beloved Community Mennonite Church, the Interfaith Alliance of Colorado, and the Alternative Solutions Advocacy Project gathered to think about how the dream of honoring the dignity of those on the streets might begin.

What could be done if enough people showed compassion for those living on the street? In January 2017, they came to the Colorado Mennonite Disaster Service annual planning meeting.

The request was simple: out of three disaster response projects for the year, could MDS bring compassion and volunteers to build 11 tiny homes and a bath house – a village for homeless people on a vacant lot?

No one had ever asked MDS this question. After a long moment of silence, the process began and – in April – the partnership expanded to include MDS, Beloved Community and Everence.

The process moved quickly. A Go Fund Me site was set up. An architect volunteered time, and miraculously, a general contractor walked the 11 tiny home plans through a building department, volunteering three full-time staff members, including a site superintendent.

Thirteen residents volunteered to work with MDS to build their own homes on the vacant lot. May 20 was the first of 10 MDS build days, with more than 100 people volunteering and four Mennonite congregations participating. 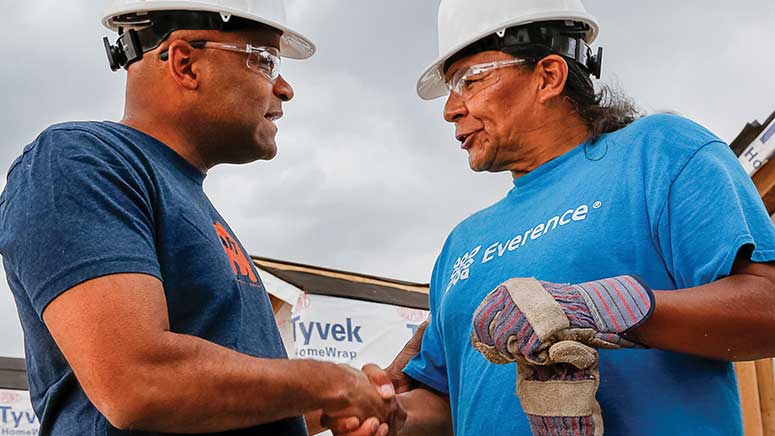 Together, the partnership didn’t build houses – it built community.

The new tiny homes are about 100 square feet each. There are two community spaces in addition to the houses – a food-preparation and meeting area, and a bath house. The bath house contains two “off-grid” showers and two sinks. And there are portable toilets that will be cleaned every week.

“The great strength of the project is the diverse community of collaborators who came together to make this happen,” says Vern Rempel, pastor of Beloved Community Mennonite Church. “There were so many people from the homeless folks themselves seeking housing to the interfaith advocacy group – the Interfaith Alliance – to the Mennonite congregation – Beloved Community Mennonite Church – to Whiting-Turner Contracting Company, to Radian Inc. Architecture, to Mennonite Disaster Service and Everence – to the city of Denver. Diversity creates immense resilience and strength – especially when it is offered with generosity and goodwill.”

Following Jesus to the margins

God is still at work in this world. It can be seen by following Jesus to the margins of society, where the homeless sleep, and asking them about their greatest dream … it’s a humble one.

“A simple roof to keep the rain out and the snow off me,” they will say. “Then I can start putting my life back together. I don’t need your sympathy; I just need a hammer and a few nails, and maybe a partner with enough compassion to show me how to do it. Just a little dignity and I’ll take care of the rest.”

People with unique perspectives can and sometimes do pull in the same direction. Being part of that kind of effort is gratifying to Cole Chandler, Beloved Community Mennonite pastor and Colorado Village Collaborative staff member.

“From my perspective,” Chandler said, “the most amazing thing about this project has been the web of relationships that has brought so many of us on board to move in one direction together.
“I have the sense that we are standing on holy ground as we do this work. Beneath our feet, a web of love is weaving together advocates of all kinds, business owners, neighbors, donors, architects, general contractors, and most importantly, our economically disenfranchised friends who sleep on the street.”

Beloved Community Mennonite is collecting donations of beds, gift cards, and other home furnishings for village residents. Anyone interested in donating may contact Chandler at coledchandler@icloud.com.

Chapter grants such as the one that aided the tiny houses project in Denver are part of an Everence program that helps local organizations and causes.

The grants are made possible when clients purchase many Everence products. Chapters are regional groups that plan and conduct stewardship-related charitable, social, volunteer and educational activities.