From Africa to Idaho

Some want to deal with their troubles privately, or one-on-one with a counselor. Some do better in a group, where support from others can make a difference.

For many refugees from Somalia and the Democratic Republic of the Congo, talking in groups is a more comfortable way to work through their situations.

Workshops in Boise, Idaho, for former residents of those African nations in late 2016 and early 2017 were aided by an Everence® member chapter grant.

About 20 adults, 30 children and 25 volunteers gathered in Jefferson Elementary School to learn about building community and healing from trauma.

“In essence, we had three projects happening – a trauma-healing workshop for adults upstairs in the gym, activities for school-aged kids in the cafeteria, and a quiet room for infants and preschoolers in a large classroom,” said Kathy Railsback, a member of Hyde Park Mennonite Fellowship.

Kathy is a facilitator for Healing and Rebuilding our Communities, a program developed by Quakers in East Africa. She’s also an immigration attorney.

Kathy and Rabiou Manzo, a staff member of the International Rescue Committee, were trained as Healing and Rebuilding our Communities facilitators in Rwanda and have led HROC workshops in Boise for former refugees from the Democratic Republic of the Congo, Burundi, Syria, Iraq, and now, Somalia. 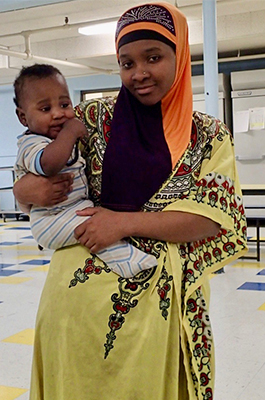 While people in the U.S. often try to keep their trauma private, the HROC approach “is a great model for former refugees from more communally oriented cultures who may feel more comfortable processing their experiences collectively with others who have had similar experiences,” Kathy said.

HROC workshops include interactive discussions, games, food and personal sharing. “The workshops gave some of these people a chance to really be listened to,” said Rabiou.

Jefferson Principal Joan Bigelow’s concerns were among the reasons for having the recent workshops, Kathy noted. Joan wondered whether minor disputes between students of different ethnic backgrounds may have stemmed from tensions among their parents.

About one-sixth of the school’s students have parents who are former refugees. Many live in a large apartment complex near the school. The idea was to bring parents together to learn and share about trauma and to get to know each other better. The school offered a close, familiar and neutral gathering place.

“Meeting at a neighborhood school is great because we can strengthen relationships between people who will see each other every day. Also, we don’t have to worry about all the usual transportation problems,” Kathy said.

Hyde Park Mennonite has supported Kathy’s work in Boise with donations, as well as providing volunteer help for child care and transportation. Costs for the workshops include supplies, interpreters, food and school custodial services. Everence helped with a grant from its national chapter, which includes members from several states.

Rabiou and Kathy plan to continue working with the group from Africa on trauma and other issues. A priority is helping parents apply for naturalization as U.S. citizens.

Kathy and other volunteers will continue helping some participants with their applications. The naturalization process can be especially difficult for seniors, women and others who have never attended school, and for people with cognitive or mental health issues related to trauma.

“We’re excited about continuing our relationship with the Jefferson community,” Kathy said. She and Rabiou plan to use the remaining Everence funds for an HROC workshop with U.S. veterans and a workshop with Arabic speakers, including former Iraqi and Syrian refugees.

Trauma-healing efforts fit in well with the city’s priorities. “When a mother or father struggles with symptoms of trauma, the entire family is affected, and a struggling family impacts the broader community,” Kathy said.

Chapter grants such as the one that aided the workshops in Boise are part of an Everence program that helps local organizations and causes.

The grants are made possible when people purchase many Everence products.