Generosity with a side of spunk 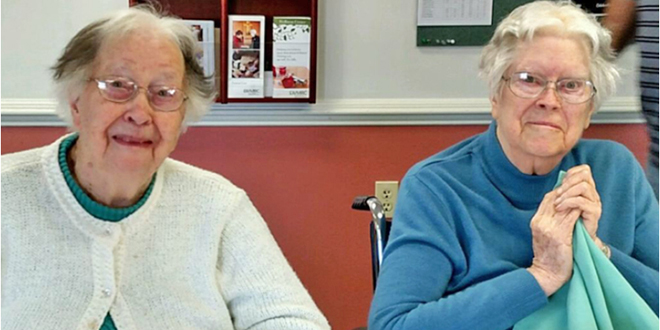 Gladys and Brownie Driver pitched in to support charitable causes for many years. And they made sure that when they died, their contributions would multiply many times over.

The sisters lived simply in Harrisonburg, Virginia. They saved and invested their money. They’re remembered for their spunk as well as their generosity.

They left their estates – totaling more than $4 million – to charities through Everence® Charitable Services. On top of that, the sisters had several gift annuities that went directly to charities.

“They were single women who lived together most of their lives,” noted Joseph Lapp, J.D., Trust and Charitable Services Specialist with Everence in Harrisonburg. “They really did almost everything together.”

Les Helmuth, Executive Director of VMRC Foundation, echoed that sentiment. “What one did, the other usually did too,” he said. VMRC Foundation is the development arm of Virginia Mennonite Retirement Community, where Brownie and Gladys lived for about 25 years.

Togetherness doesn’t mean they never asserted their independence. Gladys and Brownie were chosen for the VMRC Philanthropist of the Year Award a few years ago. “Gladys said, ‘Do I have to share the plaque with my sister or will I have my own?’” Les recalls. She got her own.

Brownie worked for many years with Rockingham Radiologists Group, and died in January 2017 at 88 years old. Gladys, a retired administrative assistant at James Madison University, died in June 2017 at 95. They resided within a 5-mile radius of Harrisonburg their entire lives.

“They’d given generously to our mission fund for years,” said Aaron Kauffman, President of Virginia Mennonite Missions. “They established an endowment in 1998. It’s the largest endowment we have.”

The endowment supports mission work around the world. Aaron said Brownie and Gladys were most passionate about supporting VMMissions’ efforts in Albania – especially an early learning center called Joshua Center.

The sisters were longtime members of Weavers Mennonite Church, where Phil Kanagy has served as pastor since 2010. Asked to describe Gladys and Brownie, Kanagy said, “In a word – lively.”

They were engaging and energetic, Phil said. “They just had a lot of spunk.”

The pastor visited the sisters in their cottage at VMRC and later in their assisted living quarters. Brownie and Gladys enjoyed giving each other a hard time, but in a spirit of fun.

“They would spar with each other,” Phil said, “but always in a good-humored way.” He recalled one example related to the sisters and their power recliner lift chairs, which were identical except for the color. “They used to spar over whose chair was better.”

While Gladys and Brownie lived in or near Harrisonburg all their lives, they didn’t always stay home. They traveled extensively within the U.S. and in Canada, Europe, Australia and New Zealand.

The sisters were quilters who donated many of their creations to relief sales. They were members of the Mennonite Women’s Sewing Circle.

Gladys also was a painter who donated artworks to charity. People often complimented Gladys on her paintings, and Sharon Kisamore remembers the time Brownie reached her limit of hearing about her sister’s talent with a brush.

“One day, Brownie said, ‘I can paint,’” said Sharon. Brownie painted a picture of water and trees. “I still have it. It’s beautiful.” Sharon added, “She was not going to be outdone by Gladys.”

Sharon knew Brownie and Gladys since her childhood through the church and family reunions. Sharon’s great-grandmother and Gladys and Brownie’s mother were sisters.

Dave Kisamore, Sharon’s husband, has been close to the sisters for years – even before his marriage to Sharon. His first wife, Nancy, was a niece of the sisters, and Dave continued visiting Brownie and Gladys after Nancy died.

One evening, Dave rang the doorbell just as Sharon called the sisters to ask about playing cards. Gladys and Brownie liked to play cards with company, and Sharon played with them sometimes.

“One of the sisters answered the door while the other was talking to me on the phone,” Sharon said.

Dave told Brownie and Gladys he wouldn’t be opposed to playing cards with them and Sharon sometime. “So our first date was playing cards at their house,” Sharon said.

Brownie was known for her dry sense of humor, while Gladys enjoyed teasing and sometimes, playing a well-planned prank.

Sharon recalls one prank in particular. The sisters were wonderful cooks, and kept their recipes in a big dishpan. Gladys copied the recipes over several lunch breaks at JMU. Then she decorated a recipe box for Brownie and placed the copies in it.

“At Christmas, Gladys grabbed the dishpan and threw all those recipes in the fire,” Sharon said. Before Brownie could get too upset, Gladys gave her the new recipe box.

Memories of the sisters endure, revolving around their generosity and the fun they had ribbing each other, Sharon said. “They would tease back and forth and always try to have the last word.”

Considering the impact of their charitable giving, they both had the last word.

Turn to Everence for guidance

Most people have charities they’d like to support financially, but don’t know about the many ways that can be done. We will work with you on a plan to help you achieve your charitable goals.

Our representatives are happy to explain the options that may include donor advised funds, charitable gift annuities, charitable trusts and other possibilities.

Learn the options Find a representative